This Wind Energy Leasing Handbook is the culmination of work performed by Dr. Shannon L. Ferrell from Oklahoma State University and Mr. Rusty Rumley with the University of Arkansas.  Handbook funding was made possible by a grant from the USDA Risk Management Agency through the Southern Risk Management Education Center - Project RME-MD-303936.  This handbook provides landowner and other interested stakeholders an overview of wind energy and wind energy leasing. 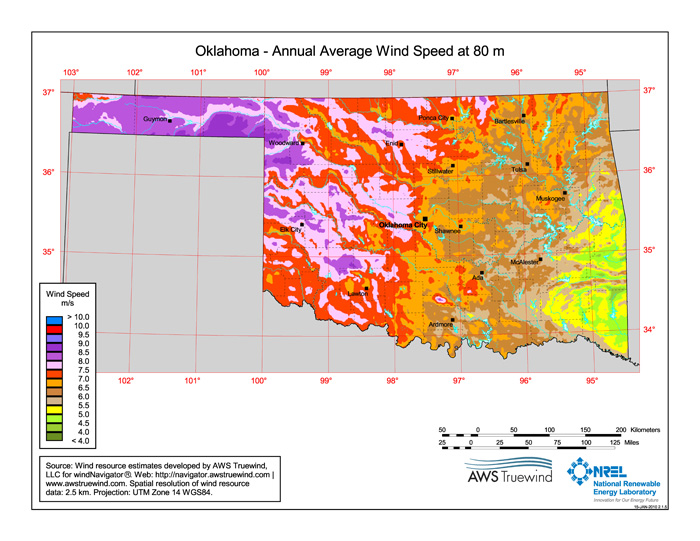 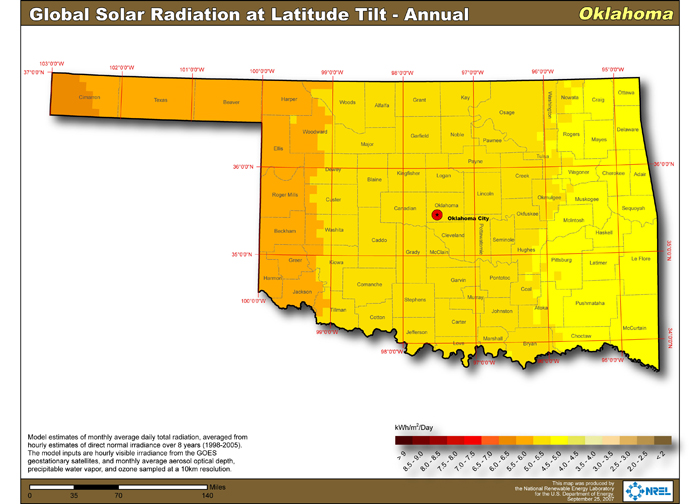 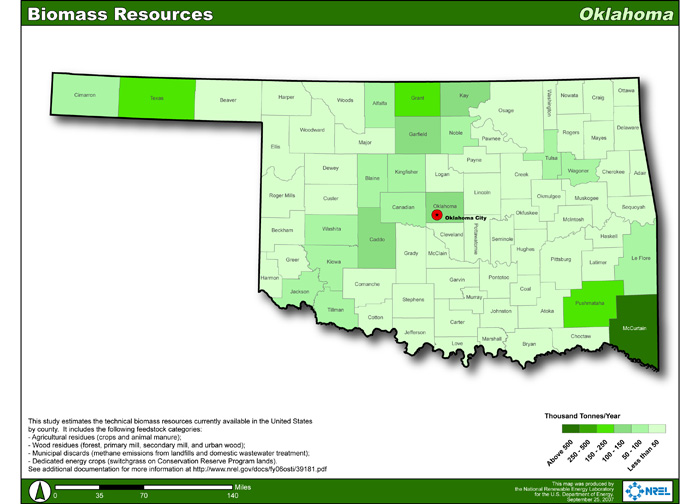 Renewable Energy Certificates (RECs), also known as Green tags,  or Renewable Energy Credits, are tradable, non-tangible energy commodities in the United States that represent proof that 1, 000 kilowatt hours( kWh) of electricity was generated from an eligible renewable energy resource.  These sources can be solar or wind, however predominately in Oklahoma they are based on wind generation.

Once in the grid, renewable energy is impossible to separate from conventionally generated energy. This makes purchasing of a REC equivalent to purchasing a claim that the REC owner consumed energy from the renewable energy generator. Hence if one purchases sufficient RECs to offset their electric usage, then the REC owner can claim that all of their electricity is generated from renewable resources and in the case of a wind REC they can claim all of the electricity they used was produced from emission free resources. The purchase of a REC does not affect how much renewable energy was made at a precise moment, but it does provide funding for the utility to enter into additional long term renewable energy purchase agreements.

Oklahoma offers a variety of incentives for renewable energy technologies.  For a complete listing, including links to reference statues and legislation, please visit the Database of State Incentives for Renewables and Efficiency (DSIRE).

In 1988 the Oklahoma Corporation Commission (OCC) adopted terms and conditions of purchase that govern the supplying and delivering of power to a cooperative/utility’s electric system by a small power producer or cogenerator (as the terms are respectively defined under the Public Utility Regulatory Policies Act of 1978) of 100 kilowatts or less.

Under the adopted rules, net metering is available to all customer classes. There is no limit on the amount of aggregate net-metered capacity, and utilities are not allowed to require new liability insurance as a condition for interconnection.

In April 2014 Oklahoma’s governor signed S.B. 1456, allowing utilities and regulated electric cooperatives to apply to the Oklahoma Corporation Commission for approval to apply a fixed charge to customer-generators who install net-metered distributed generation on or after November 1, 2014.

Under provisions in S.B. 1456 utilities are allowed to apply to the OCC for permission to apply a fixed charge to customer-generators who install net-metered distributed generation on or after November 1, 2014. Previously, utilities had not been allowed to impose extra charges for customers signed up for net metering. The accompanying Executive Order 2014-07 clarified that S.B. 1456 does not mandate increased charges for distributed generation customer-generators and directed the OCC to consider alternative rate reforms such as time-of-use, minimum bills, and demand charges before allowing the implementation of a fixed charge for net-metered systems.

You should check with your electric utility provider for their specific programs and rules around net metering.

Oklahoma allows a contractor who is the primary builder of an energy efficient home or manufactured home substantially completed after December 31, 2005 to claim an income tax credit beginning in tax year 2006. The home must be under 2,000 square feet. Improvements eligible for the credit include: energy efficient heating and cooling systems, windows, doors, roofs and insulation to minimize heat loss and gain.

The contractor can take a tax credit for the amount of the eligible expenditures, not to exceed $2,000 for a home that is between 20% and 39% above the International Energy Conservation Code 2003 or $4,000 for a home that is 40% or above of the Code. In addition, the heating and cooling efficiencies must meet the minimum requirements established by the National Appliance Energy Conservation Act of 1987 and building envelope improvements must account for a certain percentage of the reduced annual heating and cooling energy consumption levels.

The contractor can carry over any unused portion of the tax credit for up to four subsequent years. As the result of a 2006 amendment, credits earned after August 25, 2006 are freely transferable to any taxpayer upon the filing of a transfer agreement.

Property-Assessed Clean Energy (PACE) financing effectively allows property owners to borrow money to pay for energy improvements. The amount borrowed is typically repaid via a special assessment on the property over a period of years. Oklahoma has authorized county governments to establish such programs, as described below. (Not all local governments in Oklahoma offer PACE financing. Contact your local government to find out if it has established a PACE financing program.)

Oklahoma enacted legislation in April 2009 (S.B. 668) that authorized counties to create "County District Energy Authorities." The Authorities are authorized to issue notes/bonds, seek out public/private lenders, or apply for grants/loans from other governmental entities in order to establish and fund local PACE programs. Once a county has established the Authority and PACE program, county property owners, who are up-to-date on their property taxes, may enter into a contract with the county to receive a loan for permanently fixed renewable energy or energy efficiency improvements to their property. These loans are then repaid via the property taxes and they constitute a lien on the property until paid in full.

The legislation mandates that any resulting county loan program established must require participating property owners to undergo an energy audit (the cost of the audit may also be rolled into the financing received). The efficiency equipment must be energy star rated. Finally, the legislation also authorizes the County District Energy Authorities to establish a grant program for not-for-profit organizations that are property-tax exempt, although the Authorities are not required to do so. The remaining details of a county program are determined locally and will vary from county to county.

The Federal Housing Financing Agency (FHFA) issued a statement in July 2010 concerning the senior lien status associated with most PACE programs. S.B. 102 amends the law to make PACE loans junior and inferior to other liens. Effective November 1, 2011, this law should allow local governments to adopt PACE programs that are within the acceptable parameters established by the FHFA.

AVERT is a free tool with a simple user interface designed to meet the needs of state air quality planners and other interested stakeholders. Non-experts can easily use AVERT to evaluate county-level emissions displaced at electric power plants by EE/RE policies and programs. AVERT is designed to use public data, which is accessible and auditable.